USB Boot Test; The following tutorial will enable a user to check if a computer system BIOS can boot from a USB device. It can ultimately help determine if the computer can boot a Linux version from a bootable USB. In most cases if the test is successful, you should have no problem running a Live USB Linux.

In addition to testing that your PC can run Linux, the included “Memtest86+” system memory diagnostics program allows the user to scan their system memory for errors by booting memtest from the USB device.

Here’s the source code for those who would rather compile the Memtest 86+ USB installer.

The following explains how to install Memtest86+ on a USB device and further run a Memory Tester from USB. Ultimately enabling us to quickly test whether a system can boot from USB. The Memtest86 USB Installer was created per the request of Samuel Demeulemeester, the author of memtest86+. Setting your BIOS to Boot from the USB Flash Drive

Upon reboot, you should have a successful launch of Memtest86+ from your USB flash drive; 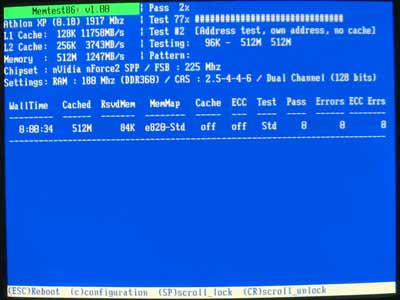 This concludes that your BIOS based system is capable of USB booting from a bootable USB device using Syslinux. If it worked, it should also be possible to run Live Linux from USB.

Notes: After booting Memtest from USB, it is not necessary to complete the system memory test. However, if you have the time, it can’t hurt to ensure that your computers memory is in good shape.