Adding a user on a fully installed Debian or Ubuntu Linux based system is possible by issuing the visudo command. Users in the sudoer group are allowed privileges to run commands and open files as root or administrator. The following segment covers the simple process of adding a new root user to an Ubuntu or Debian based systems.

Adding user to sudoers file or list to give root access and grant sudo privileges to users.

If all went well, your sudoers file should look similar to the one shown below. And the newly added user now has root privileges. So they can now also run sudo commands as root. 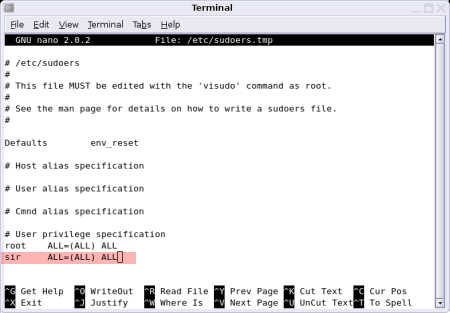 That is really all it takes to do this from a Debian or Ubuntu based operating environment. Keep in mind that you can repeat this process for as many users as you would like to add. Visudo might also come in handy for those times when you need to remove existing root users from the sudoers file. So you can use Visudo to delete and grant sudo privileges, on the fly.

This concludes the procedure to add user to sudoers file or group from within Debian or Ubuntu Linux. I’ll provide a follow-up at a later point in time, with a process for CentOS, Arch, and other Linux operating systems.